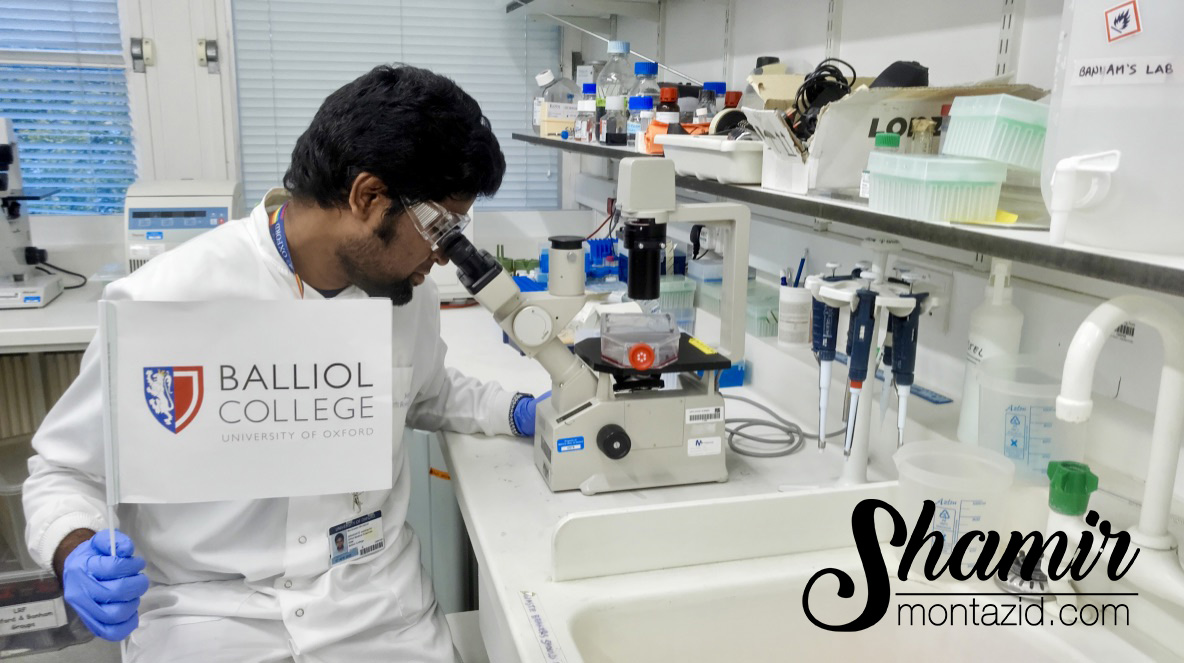 How I got into Oxford PhD


When I was young, I always believed studying in an overseas university is a matter of a lot of money and only people of the privileged class are entitled to it. I went to a traditional Bangla medium school and later studied at the University of Dhaka, a public institute. My English was subpar and my friends started this blinking game every time I made a grammatical error. Even in my wildest imagination, I could never think I, a kid from a lower-middle-class family, would be pursuing my PhD at the University of Oxford from October 2018. Today I am going to tell you my story. So, sit back and welcome to a glimpse of my journey.

It all began in 2012. I was in my freshman year at Dhaka University. As I studied genetic engineering, I was blessed with an amazing pool of faculties. One of them was Mustak Ibn Ayub who had recently flown to Oxford to start his PhD. On his Facebook timeline, he put up a photo of his matriculation ceremony at the Sheldonian Theatre in Oxford. The photo reminded me of that famous photo of Bill Clinton or David Cameron who had also been to Oxford and had taken the exact photo like Mustak. That photo left me awestruck, jealous and all I wanted is to be on that photo. A week later, I found a youtube video of drone footage of Oxford at night. The magnificent buildings that had stood for a thousand years were all lit up in the aura of darkness. On the first glimpse, all you will want is to walk on those streets and look up towards the sky full of stars. So, after watching one facebook photo and one youtube video, my premature brain decided to study at Oxford.

But, it’s always easier said than done. That year, I spent a fair share of my time surfing the URL: www.ox.ac.uk. That’s the official website of Oxford. I clicked on every tab and read anything that seemed remotely relevant for my application. Again, just to remind you, I was doing this in 2012 when I was just a freshman at Dhaka University. Years went by and I have learned all the terms and condition, requirements and qualifications to apply as a student in Oxford.

It was the year 2016. I had just finished my graduation. I was finally gathering my courage to file an application. I searched the Oxford website and read about the research of a few scientists. One of them was Dr Shazia Irshad, a British-Kashmiri, who works on ageing and metastasis of colon cancer.  We had this little journal club at Dhaka University where each student would present a recent scientific publication. That week, I presented a paper by Shazia and I could feel the complexity of her work. After that presentation, I wrote a long email to her asking if she could take me in her group. A few hours later, I got a reply, “Dear Shamir, many congratulations on your academic achievements so far. I have a few positions in my lab. I think it would be better if we do a skype call to discuss your interest.”

I was doing my MSc at that time and so I had to work long hours in the lab. The next day, I finished my experiments early and cycled my way back home. At 7 pm, my skype started to ring and on tapping of the green button, I met Shazia first time online. On our first day, we spoke for two and a half hours. She asked me all sorts of intuitive questions. I shared my idea of cancer and how much I want to create a new genetically modified disease model. At the end of that call, she said, I don’t need to do any MSc. She suggested that I should directly apply for a PhD in her lab.

Then started my long application and trails of paperwork. I collected all the transcripts, wrote the essays and managed my recommendation letters. On December 2016, I submitted my PhD application. On 13 February next year, I got an email from Oxford saying that I got into the program but without a scholarship. So, I was on my own to manage my funding.

It was a nightmare journey for me. I applied to at least 27 different scholarships. Even I met rich businessmen clubs of Dhaka to convince them to fund my study. Yes! I was that desperate. By July 2017, I got rejected from all of them. The earth cracked beneath my feet as I wrote to Oxford that I won’t be able to start my PhD due to financial reason.

Why do we fall?

So that we can learn to lift ourselves up.

What does not kill us makes us stronger.

On August 2017, I received an email from Shazia saying she wants me to come to Oxford as an academic visitor if not as a student. So, we set up an agreement between Dhaka University and Oxford for the exchange and in November 2017, I set my foot on those streets that I have seen in that youtube video. It was like a dream come true moment for me. I would ride my cycle every morning to wander around the streets just to get lost in the history of Oxford. I used to enter the lab at 9 in the morning and kept working till midnight. My passion for science amalgamated with the nights of Oxford. Those three months were life-changing experiences for me. During my stay, I reapplied to Oxford for my PhD (or as Oxford would say “DPhil”). In February 2018, for the second time in my life, I got my acceptance letter from Oxford. This time, I ranked slightly better on that list. I came to know about this Scholarship set up by the Bangladesh Government called Bangabandhu Fellowship (a presidential scholarship). Once again, I gathered all my documents and wrote a series of essays to submit an application for the fund. On 25 April 2018, I got to know that my PhD in Oxford will be funded by the Government. I patted on my back saying, “Bravo. You have just made it.”

When we talk about higher studies, we always suggest others to apply to 8-10 different universities to guarantee success. But I was adamant on getting into Oxford. That’s why I invested all my energies to apply to a single university which happens to be the number one university in the world. If you ask me what is the secret of my success, I will have just one line for you. “Never give up on your dreams.“

Ever since I started searching the web for Oxford, I kept believing that someday I will reach there. This belief is the key. Your grades, extracurricular, IELTS score will never guarantee you any success unless you believe that you are meant to be there. I am a man of science and my goal is to contribute a brick into the great wall of scientific history. What we are doing in laboratories today will potentially save the lives of millions of cancer patients in the future. This is a feeling that always kept me going.

On 13 October 2018, I matriculated at the Sheldonian Theatre in Oxford. My mentor Mustak (now Dr Mustak!) came to meet me on that day and we had a wonderful lunch at the great hall of Balliol.  I often wonder what would have happened if I hadn’t come across that photo in 2012 on Facebook. From being inspired by that photo to be in that photo, I went through a series of life-changing lessons of perseverance to finally call myself a DPhil student at Oxford.  Balliol is one of the oldest colleges of Oxford established in 1263. People like evolutionary biologist Richard Dawkins, noble laureate Linus Pauling had been to this college. I am humbled and at the same time proud to be part of this rich tradition of knowledge.

The word ‘impossible’ is bound by a timeframe. What seems impossible today is a reality of tomorrow. That’s why it’s very important to dream big, bizarre and bold. But our ability to dream is often limited by the perception of our society, our education and of course money. A few years back, I heard a guy saying this at his Harvard graduation--

“The sky is not the limit, it’s the beginning.”

This is something I truly resonate to. There is no limit to your dream.

Thanks for listening to my story…