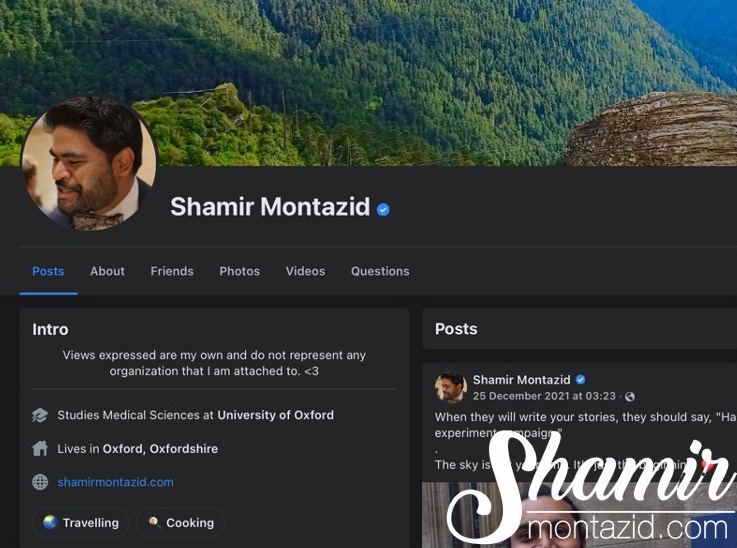 
Hi, my name is Shamir. I have nearly 100,000 people following me on various social media platforms which qualifies me as a (mini) “social-media celebrity”. In this blog, I am going to confess how I have mistakenly helped Facebook gain more engagement and revenue by using my skills of writing blogs, creating educational videos, and, most importantly, playing with sensitive emotions.

It all started in 2013 during the sophomore year of my university life. After years of financial struggle, I started working as a teacher in a parallel school which helped me put my family out of the poverty line. Being a child who was raised by a single mother, I was filled with very intense emotions of deprivation. Suddenly, during this year, I started hitting a gold mine of social media followers.

For the first 5 years of using Facebook (2007-2012), I was just posting what I was doing in my ordinary life like preparing for an exam, meeting my friends in a restaurant, etc. Then, in the summer of 2013, I wrote a blog describing the financial difficulties I have faced during my childhood and how I managed to crawl out of it by working hard.

Boom! This was an instant hit. Everyone could relate as they were also struggling with their financial situations and they could see me as an example of a hard-working individual who was making it to the success line. Just to make things a bit more seductive, I wrapped my stories around the struggles of my single mother and my deceased war-hero father.

What more do you need to get attention, right?

Over a year, people started to read, like, and share my blogs over thousand times across social media platforms which ignited dopamine (a hormone secreted by our brain during pleasure) rush in my blood to which I was decisively addicted.

Don’t take me for an evil mastermind who was doing all of this knowingly. I wrote a lot of articles among which the aforementioned ones were the very few that received tractions. I am merely focusing on these ones as I am looking backward. I had no idea, at that time, that I am only a puppet to a real-world evil genius. I do know now and we will come back to that later in this blog.

Let’s pause for a second and think. Imagine you have a crush on someone and that person gave a heart reaction to your profile picture on Facebook. How would you feel? Now, imagine 10,000 new people sending friend requests every day to a young adult with the intense emotion of childhood deprivations. Can you fathom how I felt during that time?

I was showering with dopamine secretion and I was meth-high on it. On average, I spend 6-8 hours/day on Facebook doing nothing but checking who sent me friend requests, what they commented on my videos, and, most importantly, who is the cutest among them. I had no control over my wishes anymore. I was only posting photos, videos, and blogs that will earn me more likes, comments, and shares. And it was never enough.

By 2015, I was working with an acquaintance to create an online platform of video tutorials which became a success story over the next 5 years. This was the time Facebook launched their new feature — “live videos” and we saw a huge opportunity. Without wasting much time, we focused on taking live classes on Facebook where, for the first time, our online students can interact with us in real-time. And the best part is all of these— it was completely free for our students. In a few months, we became national news as few university kids were teaching science over Facebook live class using only a whiteboard and a smartphone. With that popularity, donations flooded in from corporations who wanted their slice of fame piggy-backing on our success.

Shamir, wait. You promised us that you are going to say why you are ashamed of your celebrity status. The only thing you are doing is bragging more about it and trying to justify your actions using your childhood deprivation.

Sorry, if you have felt that way. That was by design. Now, let me keep my promise.

When I was leading the live-class project, one of our main goals was to get traction and engagement. That means we focused a lot of energy to gain likes, shares, and view count from the video. This led to an unpleasant practice of asking our live-viewers to share this video every 5-10 minutes so that we can reach out to more people. While all of our instructors were good with the subject knowledge, we prioritized the ones who were more charismatic to earn more reach. We had to arrange workshops for instructors to make them more “like”able. Because the game was not only to give free education but also to capture their attention space.

Is there anything wrong with this idea?

Not really, as long as our main goal of delivering quality education is intact. But things got worse when the donors were judging our success by the number of likes and shares we were earning. This was the point things started to get worse, in my opinion. It’s very hard to assess the quality of education. But it is very easy to quantify the engagement and reach of a video. As a result, we entered a loop of prioritizing class/instructor that we knew would earn us more reach. As collateral damage, we side-lined individuals who were good instructors but not charismatic enough to sustain in our viral industry. We redefined what “good instructor” would mean.

Unfortunately, all of these were packed under the charismatic stories of our personal lives. The day we could not earn enough reach via our videos, we compensated by posting the smiling faces of our charismatic instructors. At this point, some of our instructors started behaving more like prophets and less like a school-master.

I am definitely to blame here. I never asked myself the flip side of what we were doing as I was mostly soaked with the dopamine induced by my social media traction. What I did not see then but can see now is how we helped Facebook earn more and more money and, most importantly, legitimacy. Parents always had an intuition that Facebook might not be good for their kids. Many parents limit the Facebook use of their teenage offspring. But, in 2015, we were advocating for the good side of Facebook as a learning platform. I, myself, said in a video— “If your parents are not letting you use Facebook, tell them you are watching my chemistry tutorials.” I was too naive.

What happened, in reality, is this— the teenagers saw my video and told this excuse to their parents. The parents were skeptical and both of them watched my videos. At the end of my class, the parents were convinced about the good side of Facebook and left their sons and daughters unsupervised to watch my tutorials. I took my live class. They watched the video and interacted with me. I forced them to press the heart reactions by being extra charismatic and they learned the game of the virtual space. Then, I did the worse thing ever. I finished the class and left them to the real-world evil genius— “the Facebook algorithm”. I never warned those naive students about the danger of the watch button or the like button.

When my chemistry class ended, the Facebook algorithm started its major game. It has now learned a few things about my students— how long they were looking at my video without any interactions, which reaction button they were pressing more often, and whose comments they were reacting to. For example, Maisha was in my class to learn chemistry. During my 50 minute class, she gave 5 likes, 3 hearts, and 35 angry reactions. Based on this, at the end of the class, you can presume that Maisha is now angry. Also, during the class, she was minimizing the video every 2-3 minutes as she was getting bored. This is a sign of short attention space. Moreover, she reacted to Sadman’s, a fellow online student, comment 7 times indicating her interest in Sadman’s life. Additionally, based on Maisha’s previous interactions on Facebook, it is evident that she is against homosexuality.

As a result, the moment I finished my live class, the algorithm will suggest to her a 2-minute long video where a religious leader is packaging hate speech against homosexuality under religious verses. The best part is when Maisha started watching the video, she would notice this was previously liked by Sadman. 1 min 30 sec down the line, she would abandon watching the video and go to Sadman’s profile and scroll his timeline. She would give a heart reaction to his profile picture and come back to watching the video. She would give the video another heart reaction and feel happier. The algorithm has earned its engagement, Maisha has earned her false sense of happiness and the world is now more divided than ever.

I do not think people at Facebook were initially evil geniuses. They wanted to promote positivity and hence created the like button. They designed an algorithm that will make users spend more time on the device and give them a false sense of happiness. What they never saw coming is how political campaigns will be designed to create a ‘love-vs-angry’ reaction war. In 2016, the Trump campaign hired Cambridge Analytica, a company that claimed to have harvested over 5,000 data points of each American voter from Facebook. This was possible due to a glitch in the Facebook system that they never saw coming. The result was an election campaign designed for hate speech and polarization of the left and the right. Narendra Modi from India, Bolsonaro from Brazil, and Brexit campaign in the UK are all notoriously tainted with this engagement algorithm that exploits our attention space. And the worst part— this made Mark Zuckerberg one of the wealthiest men alive.

It won’t stop here. It will only get worse. They will probably create “Facebook for kids” which will be so engaging and easy to use that they would not need parents to even teach the kids how to use the app. Facebook will probably hire child psychologists and tech designers to create the most engaging and easy-to-use platform ever for children. They will say it is an educational platform. They will say it cares about your child’s mental health. But what they will not say is their algorithm is optimizing for the highest level of engagement. The app will be so addictive that parents will not need to worry about a crying baby anymore. They will give the child a phone and it will take care of the child. The algorithm will slowly tweak the political view and religious sentiments of the kid based on the money it receives from Facebook advertisers. All of this will happen if you do not take a step back. NOW.

What can you do?

Thanks for reading my ten commandments. These are my opinions and you may disagree with this article. That’s completely fine. I do not wish to have an online conversation with you. Talk to your friends about it offline. If you wish to read more of my blogs, visit www.shamirmontazid.com once a month. I do not provide any email subscription services and I do not show any advertisements on this site. This site is paid for out of my own pocket. No user data is harvested and the blog suggestions are random and not based on user behaviour.